The game-by-game history of the Green Bay Packers

The search for important details about every Packer game – beyond the statistics – has become much easier.  The Packers Century provides concise summaries of every Packer game played through 2021.  The games are in one document, so you can move around easily.  Summaries describe the action in all 1,484 games and the amount of game information is unmatched. Jim has been writing and speaking about the Packers since 2011. Here are all 1,484 games with recaps of all the scoring, the big plays, the stars, and fan reactions. All 103 seasons also have the final standings, team leaders, all-pros, and notable draft choices.

More than half of the games have stories and comments from fans, players, and sportswriters about playing for the Packers and the team’s storied relationship with the community and the fans.

(Seasons are updated at no charge.) “For Jim, this has been a labor of love. Detailing every game of pro football’s most famous team is quite a challenge. A game-by-game walk through the seasons of this historical Packers franchise is a treasure for every fan, and those fans to come.”

“The Packers Century is one of the most comprehensive books ever done on this iconic franchise. Jim Rice provides an in-depth look at everything that happened from Green Bay’s first season through its 100th campaign.  This is a must-read for Packer fans old and new.”

Rob Reischel is the author of several books about the Packers, including, 100 Things Packer Fans Should Know and Do Before They Die. 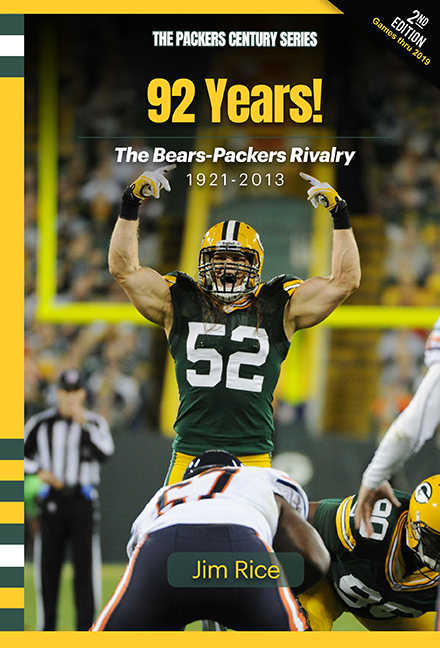 Follow the NFL’s best rivalry from its beginning through 2013. The games, the heart-stopping plays, and the antics that have stoked this rivalry for nearly 100 years are all right here! Games are presented chronologically, and NFL history comes alive through the rivalry.

“Jim Rice has done a nice job reviewing each game in the rivalry.  The book certainly brings back memories for me, both of the games I covered and games I watched on TV growing up.  It also provides historical reference for games and details I was not aware of.”  Dennis Krause, Packers Radio Network Enjoy all the winning seasons from Curly Lambeau’s undefeated 1929 squad to the resilient Super Bowl XLV Champions. Revisit the only three-peats in pro football history and the stars of the NFL’s greatest franchise.

“A wonderfully written book that relives the rich history of the Green Bay Packers organization. A detailed game-by-game rundown of each of the 13 Championship Seasons.”  P.C. Braatz — Amazon Review This ancient big city-small town rivalry is presented in great detail. Interesting connections between the franchises are explored. Special attention is given to the players and coaches who found greatness in Green Bay after a previous association with the Giants.

“Rice really gives an in-depth analysis of the Giant-Packer rivalry. His knowledge really puts the reader into the action on the gridiron.”  R. Myers — Amazon Review Great Games of the Gridiron

Great Games of the Gridiron are the 33 NFL Championship Games before the Super Bowl Era began. These memorable battles boosted pro football’s popularity, and helped it become America’s favorite sport. Take a look back at some of the greatest games in NFL history.

The program is available both in-person and via Zoom. Please let me know if you have any questions or if you want to schedule a program. My email is jim@packerscentury.com